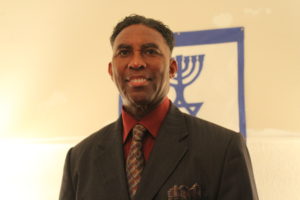 Apostle Jessie R. Bates has been the visionary for Ambassadors For Christ Ministries since its beginning in 1997.

Ambassadors For Christ Ministries is a 501(c)(3), non-for-profit organization that birthed the Stop The Violence Project in 2005.

Apostle Jessie was a major drug dealer for 17 years, and that lifestyle ended in crack cocaine addiction.

God changed his life in Atlanta, GA, in 1990, and he began his journey to recovery.

Because of Apostle Jessie’s past background with the drug culture, his now 27 years of sobriety, along with over a decade of working with law enforcement, social service organizations, health care providers, small and large businesses, in communities throughout Central Illinois, Apostle Jessie has been a catalyst for change in inner-city areas since 2005, where he, along with the Stop The Violence Project, has established a reputation for assisting those communities in decreasing violent crimes.

Through Apostle Jessie’s remarkable testimony of recovery, he has seen drug dealers, gang bangers, prostitutes and many drug users lives change and become productive citizens, business owners, church leaders and counselors to those that are still trapped in criminal and immoral activity.  He has  become an example of how lives, no matter how desolate, can change when compassionate communities partner together and reach out for their fellow man.

Throughout the years, the Stop The Violence Project has not been limited to those already established Central Illinois communities of Peoria, Bloomington, Champaign, Danville, Springfield and Decatur, but has also conducted street festivals in Lincoln, IL, Elkhart, IN, Crestview, FL and Brownsville, TN; and,  just recently was extended an invitation to bring the Stop The Violence Project to Chicago, IL, New Mexico and Mexico in 2018 and the near future!

All of this has been possible because of the incredible long-term commitment of partnering agencies, individual partners, volunteers and financial donations by those who have a heart and a passion to see lives transformed; one life at a time.